One thing first! It looks like if there are only 2014 posts here. No. To get new posts filed under the latest one, I have to do it in the 2014 way... (This line I wrote in 2020!) Any new developments are always published here.

In this simple website I am going to tell something about interchanging files between Adobe Photoshop and Trimble SketchUp.

Photoshop
I am working with Photoshop CC, but anything we discuss here can be done with Photoshop Extended CS5 and CS6 too, if not otherwise indicated.

SketchUp
I am working with 2016 Pro, but anything we discuss here can be done with freeware Make, unless otherwise indicated (some export options f.e.).

I shall discuss the SketchUp export options, of which the files can be used in Photoshop. These files can generally be opened directly with Photoshop, but you might run into problems. Always import these files in new Photoshop documents. 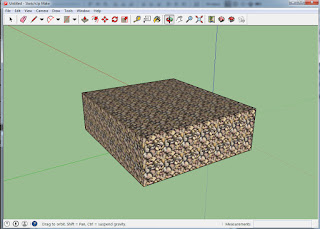 
Possibilities for importing and exporting (saving) 3D files in SketchUp and Photoshop: 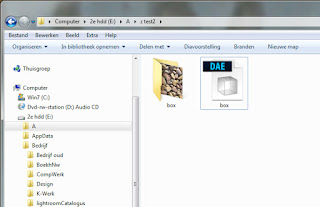 DAE files are commonly called Collada files.
You can export DAE from any version of SketchUp.


1
Make an object in SketchUp, say a box. You do not have to make a component of it, since that makes no difference now.


2
Give the object a skin. Use a material like a groundcover on all sides.
This is necessary for two reasons. In the first place it will make differences between the various export options clearer. And second: an object not having a skin or an incomlete skin might show in Photoshop (partially) as a TIN, as we shall see later (TIN: Triangular Irregular Network; search on sketchup + tin.) or as a wireframe.


3
File > Export > '3D Model' > 'COLLADA File (*.dae)'.
This will result in the export of a DAE file of course, but also a JPG of the skin (see above). There will be no JPG if instead of a groundcover or such (a "3D" material) you use a color ("2D"), though the export of the color works fine. Later you shall see why we want to have a JPG.

(Export a box or such without skin, and compare.) 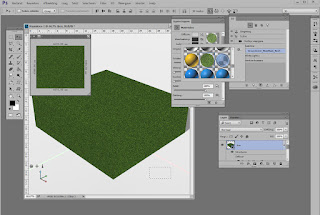 (Here in Photoshop I have already changed the skin)
6
(Do the same with the box without skin and compare. Works fine using DAE.)


7
In Photoshop open both 3D and Properties panels (see above).
In the 3D panel select the layer with the same name as the skin. See that then, in the Properties panel, you can change to another skin. Do so. As you can see above, the new skin ("grass") is applied to the whole object, although we did not make that into a component.
Save the file as a PSD but of course with another name now. 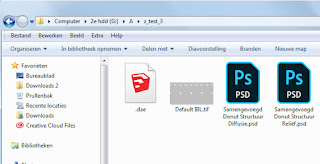 8
Do 3D > 'Generate UV's' and after that 3D > 'Export 3D-Layer' and choose DAE.
Have a look at all the files you have produced. See above. The two files at the right are the UV PSD files. In early versions of Photoshop CC there was one file, a JPG.


9
In SketchUp do File > New, and then File > Import. Select 'Colada Files (*.dae)', choose the DAE exported from Photoshop after changing the skin and click OK.

[SketchUp 8 / Photoshop CS6:]
Disregard a possible warning.
See that the result is far from correct. Even if you export the unchanged PSD as DAE, it will not import correctly in SketchUp, although the export does produce a JPG of the skin. 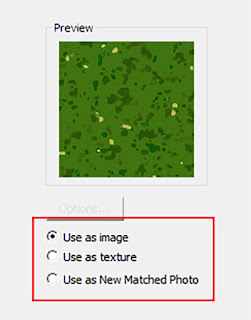 Something which has changed in SketchUp Make 2015, compared to SketchUp 8, is that when importing something, you get a so called Loaded cursor, as to be able to position the import. 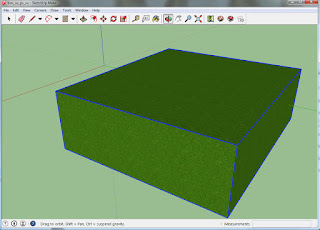 [SketchUp 8 / Photoshop CS6:]
If you leave one or more sides without a skin in SketchUp, then you will be able to apply a skin to those sides in Photoshop, but as soon as you rotate the object things go wrong. 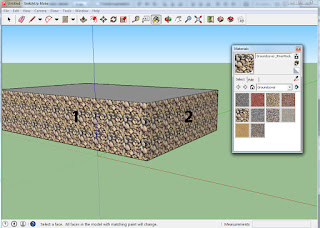 See below, exported as DAE and imported in Photoshop. 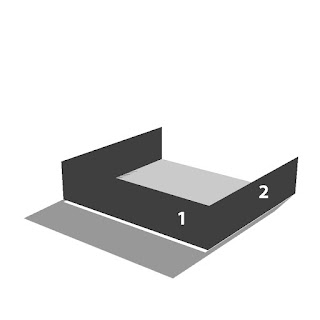 Hope to get comments on that...
The grey rectangle in front is the shadow. Where the 'botom' and the third side came from (as they were not covered with a material) I don't know.


KMZ files are commonly reffered to as 'Google Earth Files'.


1
Repeat the steps as for exporting as a DAE file, but this time choose 'Google Earth File (*.kmz)'.


2
Import the KMZ file in a new Photoshop document, and you shall find the form of the object, without its skin.
Save the file as a PSD and close it. Put it in a new folder, together with a copy of the DAE folder in which you found the skin as a JPG.
Open the PSD in Photoshop. No skin (see below). 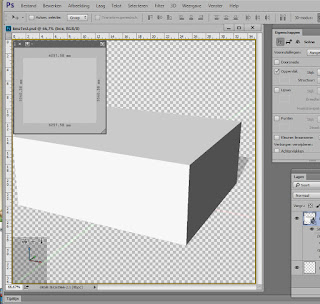 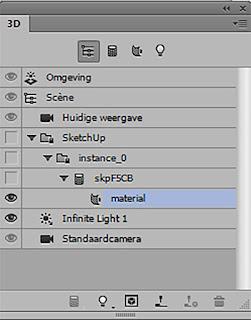 [SketchUp Make 2015 / Photoshop CC]
In the 3D panel open the layer SketchUp, and select the sub-layer Material. See how the properties panel changes.
In the Properties panel, nearly at the bottom (you might have to strech the panel a bit), click the folder-button and choose 'Load structure' and select the skin in the DAE sub-folder. You might expect the structure to appear between the structures that are already present (see below), but that is not the case. You must now click the arrow next to Diffusion, and [2014] then choose the name of the structure JPEG, or [2015] choose Swap Structure and choose the skin from the DAE. There you are.
(After this, you cannot choose 'Load structure' again. Close and re-open the file for that.) 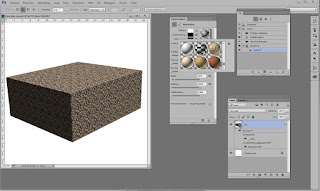 3
[2014] I exported the 3D layer from Photoshop as KMZ. I then imported that in SketchUp. Only a wireframe appeared.

The KMZ file is a zip file, just like f.e. an ePub or a Style Builder STYLE file.
Change the extension of it to .zip, and unzip it. Mac: search for mac + file + change + extension.
You now have a file called doc.kml and a folder called models.
In the folder you find a file called untitled.dae. You also find another folder there called untitled, containing the skin, called texture.jpg. These files of course can be used to import the file correctly in SketchUp.
In Photoshop you can work with this new DAE also of course, and note that the object is much brighter then the one obtained through the KMZ file.

If you click the doc.kml file, you shall see your object, placed on the earth somewhere in Colorado (Google!), in Google Earth. See below. Mind you, this is only a 2D; you cannot 'walk around' it. 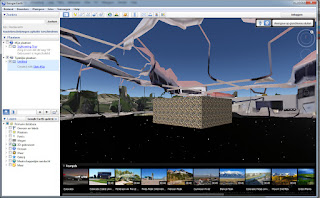 In Photoshop 2015 this is different now. There is no KMZ export option anymore. Now you have a seperate menu item, 'Share 3D layer in Sketchfab'.
That was untill the november release. Its is like in 2014 now again.

For Sketchfab see https://sketchfab.com/. Go there and click 'See more cool features' for an introductory video.

OBJ files are commonly referred to as Waterfront files.
Importing als OBJ file is not possible with SketchUp freeware, but search on sketchup obj import plugin. 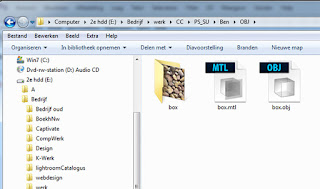 1
Repeat the first steps again but now choose for exporting as 'OBJ File (*obj)'. See the 'OBJ Export Results' panel and click OK.
See above the files that were exported. The MTL file is a so calles Alias file, used in Autodesk. Although you have a folder with the material JPG, the MTL file is also a material file.


2
Import the OBJ file in a new Phtoshop document.
This works fine. 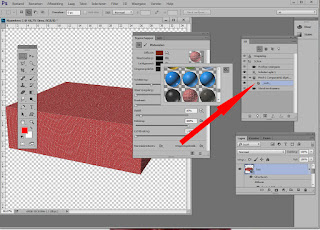 3
To be able to change the material, you now have to click the layer that you see selected here above.
Save as PSD just to be sure.
Do 3D > 'Export 3D Layer' and export it as OBJ.
See all the files you get below here.

3DS files are Autodesk files ('3D Studio').
It is not possible to export as 3DS from SketchUp freeware. 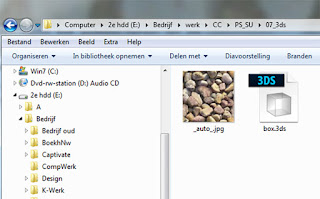 1
Export the object from SketchUp as 3DS file, choosing '3DS File (*.3ds)'. See the files you get above. 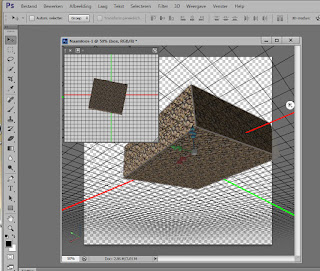 2
Importing a 3DS file in a Photoshop document worked well in CS6, although the object was quite dark (we saw this before). See above.
Importing it in Photoshop CC 2014 or 2015 does not work, although the material did show. See below. 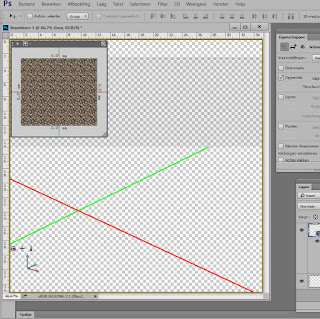 
We shall export a skin, for working on it in Photoshop, and import it again in Sketchup.

I then work on that and export it as a JPG again. 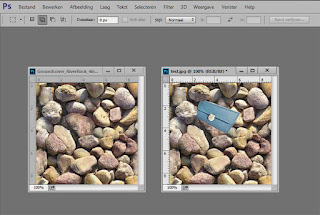 In SketchUp now proceed as follows. See below.
Be sure that A is at 'In Model'. Click B so that C appears.
Click D (Create Material). Second panel E appears. At F find the skin JPG. Click OK. G appears. 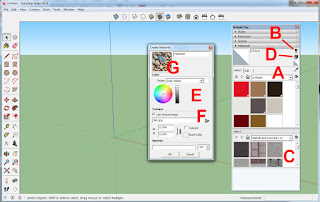 You now have the skin uploaded in SketchUp, see below.
You can use it as any skin, but mind you: you have the skin In Model, in the file that is open now. Close that file without saving and you loose the skin. You can right click the imported skin and save it as an SKM file, SKetchup Material. Save it at Program Files > SketchUp > SketchUp [versie] > Materials, in a new folder. Restart SketchUp and the new folder will appear among the already existing, at H. 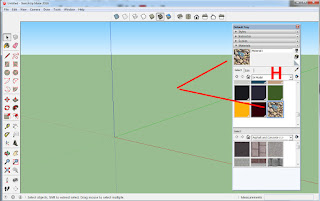 As from Photoshop 2015 you cannot import SketchUp objects covered with more then one skin (material). 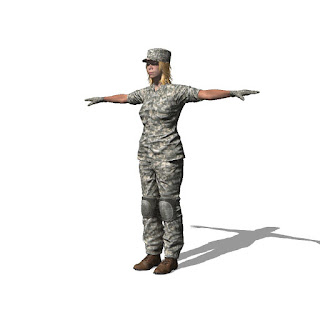 Adobe Fuse files can be uploaded to your CC Library, and from there you can place it in a file. See above. Exported as DAE it can be imported in SketchUp. See below, covered with the TIN. 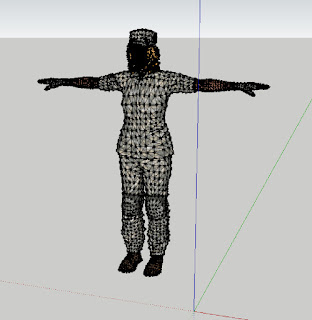 Selecting the model, right clicking and choosing 'Soften Edges' results in what you se below. I am still working on this.


I shall add comments on working in SketchUp with Adobe Project Felix objects soon. 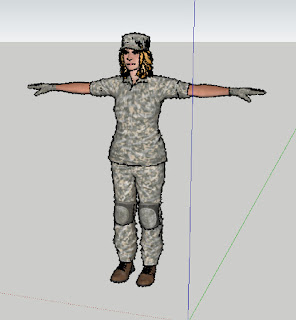